Our municipality, its history and its people

History of the municipality 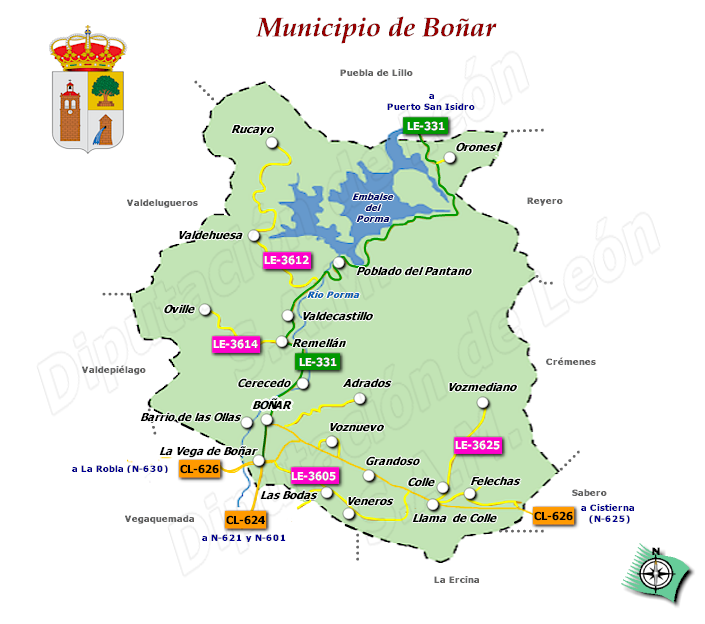 The village of Boñar, surrounded by mountains, is located in the north of the province of León, 45 km from the capital of the province.
An important part of the municipality is integrated within the Montaña de Riaño y Mampodre Regional Park, where you can find various plant and animal species such as pine, holly, oak, poplar, wolf, eagle, deer, wild boar, and even bears.

The surface of the Municipality of Boñar is 180,6 Km2.
The population density is 1.28 inhabitants./Km2.
It is located at an altitude of 975 m above sea level. 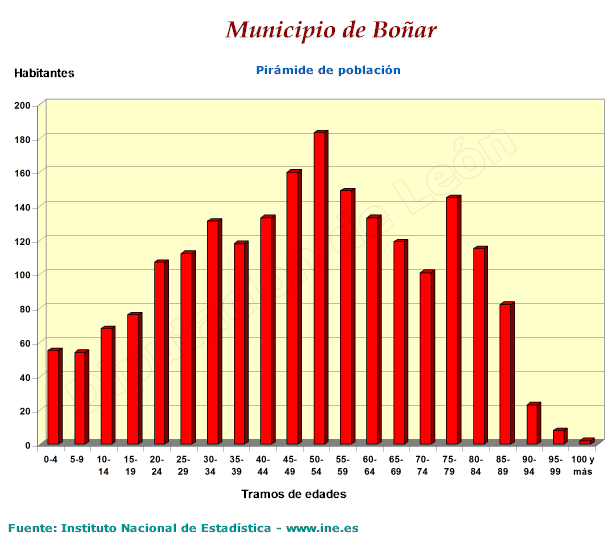 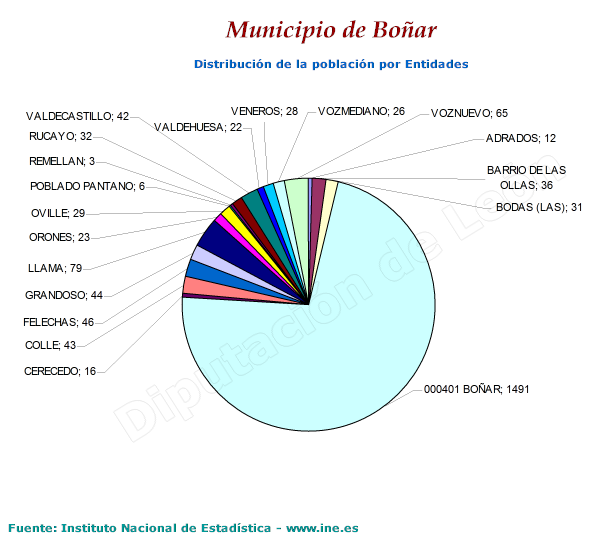 Coat of arms and flag:

Split and half-cut shield.
1. a church tower.
2. a tree.
3. a fountain.
To the bell royal crown closed.
All apparently in their natural colours, the 1st and 3rd quarters in silver and the 2nd in gold. 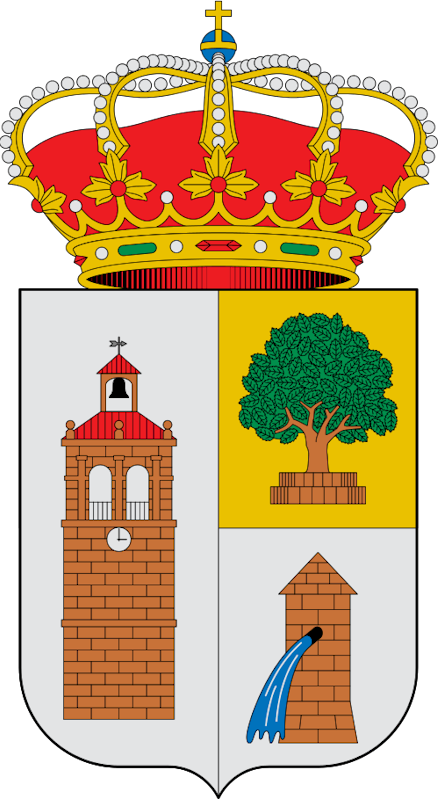 History of the Municipality

Boñar is mentioned for the first time in the year 924 on the occasion of the donations made by Count Guisvado and his wife Doña Leubina of several of their possessions within half a league around, for the foundation of San Adrián. On this occasion, it is said that a council was held in Boñar. In 959, Vindemio signed a public document as abbot in Boñar. In the year 960 it is known that this monastery is dedicated to Saint Salvador and that it was built by the presbyter Saluto Melik.

However, it is the territory of Boñar, and in Iberian and Celtic times many of its waters must have been used for bathing, as indicated by the name of the river PORMA, which means “hot and gushing water”, the Caldas de San Adrián and the “fuente de la Calda o salud” in the village of Boñar itself, which bears the following inscription:

It states that this fountain of health was built in Roman times by Alexius Aquilegus in fulfilment of a vow.

In the Middle Ages there was a county in Boñar with a castle or fortress, from which the whole territory of Balneario was governed. The current term “Los Castillones” refers to them.

In the 10th century, Pope John VII asked King Alfonso III, who was fighting the Arabs, to put Count Guisvado at the head of his troops in this area, to whom he gave the relics of Saint Adrian and Saint Natalia as a reward.

In this same century, the monastery of Sahagún had many properties here, such as a mountain in Cerecedo, the Monastery of San Salvador and several villages or hamlets, including Las Bodas, Veneros, Orvilla and Tranto Breto.

Bishop Fruniminio also sponsored the construction of several monasteries on the mountain of Pardomino, where he came to live at the time of his retirement, and where he fought with Boñar and other villages to defend his rights.

In the Middle Ages, the territory of Boñar also had numerous possessions belonging to the Flainez family, Counts of Aquilare (Sabero).

n the 11th century, the royal family of León also had possessions in Boñar. Doña Urraca died without succession and they were inherited by her brother King Alfonso VI, who gave them to the León Cathedral.

In 1325, Alfonso XI donated the lands to Boñar, exempting Bishop Manrique from giving the lands when he lived in León, allowing the possessions of the church of León to be extended to Boñar and Lillo, which was confirmed by King Alfonso X in 1329.

In the 12th century, Boñar was already a royal estate.

On 2 April 1206, King Alfonso IX donated the territory of Boñar to the monastery of Valdediós.

In 1334, Fernando II also donated the portage of the bridge of Boñar and the hospital to Valdedios.

In the time of Carlos V (15th and 16th centuries), the counties of Colle and Boñar are known to be in the hands of the Guzmanes of León. On 11 May 1521, the Emperor confiscated the assets of Boñar, Colle, Valdore and Vegas del Condado for 8000 gold florins and 26668 mrs. and the houses of Boñar, Colle, Solle and Redipollos are sold to pay the imperial fine.

The inhabitants of these villages are in solidarity with the communards and especially with their leader in León Ramiro Núñez de Guzmán; they are therefore called “gente homiciana”,

As a consequence of this, the Guzmans ceded their rights over Boñar, Colle, and Aguilar to the Osorios, or Marquises of Astorga, or palace in Boñar, where their coats of arms still stand and where they are still imprisoned and named them merinos mayores de las montañas de León (senior merinos of the mountains of León). A writing of the time says that the Marquises of Astorga Count of Altamira are the most powerful people in these lands after the Pope and the King of Spain.

The Marquis of Astorga is patron of the parish church of Boñar, contributing to its reconstruction and leaving as a gift the clock tower to which the village gave the name of El Maragato. Its tower dates from the 17th century. The front part of the church was built in 1815 and the back part in 1895. It is a fine work in the Renaissance style.

In 1652, Boñar suffered a tremendous disaster due to a flood that swept away many houses, which were later rebuilt on the site where the town stands today, far from the river. Such vicissitudes were repeated twice at the end of the century, with the carts floating in the Plaza del Negrillón.

At the time of the conquest of America, Boñar placed some of its characters there, one of them with the title of Intendant General, as can still be seen today in some of the millenary coats of arms of the Villa. The land registry of the Marquis de la Ensenada of 1752 gives the town of Boñar as having 360 inhabitants.

In the War of Independence, General Díaz Porlier, the “little marquis”, who formed a mixed division to conquer the city of León, was active here.

General Castañon, a native of Vegamián, was also involved here.

In the carlistada, the former mayor of León, Señor Balanzátegui, gathered here 200 shotgunners with whom he tried to give battle to General Espartero and his troops, but the liberals led by Álvarez Acevedo forced him to flee and he was killed near Guardo.

The growth of the council

In 1894, the coal railway arrived from La Robla to Boñar, starting the growth and conversion of the town into a service town and commercial centre of the region.

The construction of the road from Boñar to Puerto de San Isidro was also soon undertaken.

Monday markets were established, the fairs of 2 and 3 February or Candlemas, 10 and 20 March or San José, 29 and 30 June or San Pedro, those of July, 12 October those of Pilar and 28 and 29 November those of San Gregorio. For a long time, the region’s Pardo-Alpine breed of cattle excelled in them.

ts traditional industry was the “piedra de Boñar” from which the cathedral, San Isidoro and many other stone and ashlar buildings were built. It became famous for its delicious sweets, “los nicanores”, created by the famous confectioner Nicanor Rodríguez.

A large volume industry has been the talcum powder factory that markets this product nationally. The Negrillon, which seems to date back to the 16th century, was for a long time the symbol of the town, having dried up a few years ago, although it has been petrified to preserve it.

The parish church is named after St. Peter the Apostle and has a parish priest and curate. Notable are the Semana Santa pasos, which were partly destroyed by fire a few years ago.

On the outskirts is the hermitage of San Roque, an ashlar and masonry building where the brotherhood responsible for contributing to the splendour of the patron saint’s festivities held on 16th August has its headquarters.

In terms of folklore, the so-called “jota de Boñar”, “los aluches” or “lucha leonesa” and “bolos” should be highlighted.

Of all these beauties in Boñar, however, the most celebrated are the Maragato and the Negrillón, as the folk song sings:

“Two things has Boñar
which León does not have;
the Maragato in the tower
and in the Plaza el Negrillón”.

Information prepared by the State Meteorological Agency. Ministry of Agriculture, Food and Environment.